Night is slowly permeating the evening sky in Place André Malraux.  The rain has eased into a steady drizzle and the yellow street lamps have come on.  The air is imbued with car exhaust fumes and roast chestnuts.  A smell of autumn in Paris.  The sound of traffic plays against the background of a gurgling fountain in the middle of the square and the wind rustling the brown leaves on the trees.

The queue under the colonnade of the Comédie Française is stretching all the way to the theatre shop.  We are all waiting for the box office on the side of the building to open and release the €5 tickets for the restricted view seats an hour before the show.   Molière’s Les Fourberies de Scapin.  €5 for a performance by one of the top theatre companies in the country.  Like hell would you get this in London, no matter what the view or the altitude.

In front of us, stand two children.  The boy must be about ten, his sister a couple of years younger.  Their mother is standing a few feet away, leaning against a pillar, smoking a cigarette.  She expels the smoke into the square, and darts regular, vigilant glances at her offspring.  The boy is reading aloud from a dog-eared, folded back copy of Les Fourberies de Scapin while his little sister listens intently.  He tells her the names of the characters before reading their lines, and occasionally pushes his blue-framed glasses back on his nose.  Occasionally, he trips over a word and goes back to it, re-reading it until he gets it right.  Every so often, his sister asks for an explanation.  Why does he say that? What does it mean? Her blue eyes are filled with admiration but her tone is that of a challenge.  Her brother explains.  A mixture of patience and irritation.

He comes across a series of difficult words. Too many in a row.  He tries to tackle them but it’s hard work.  He knows he’s done very well up to now and there’s no shame to walk to the pillar and ask his mother.  She throws down her cigarette butt, blows out the last of the smoke and takes the book from his hand.  She reads the sentence and explains it.  She comes back to stand in the queue and takes over the reading shift.  All three sit on the pavement by the wall and she slowly reads aloud.  Her son listens but his attention occasionally wanders as his eyes follow cars and passers-by.  His sister has huddled against their mother, head on her shoulder, staring at the printed page.  Every so often she smooths her pony tail.  Three ash-blonde heads close together, reading and listening to Molière.

When restlessness disrupts the reading, and the siblings clearly need some physical exercise after the mental culture, horseplay starts.  There is some kicking and shouting.  Stop that now.  You’re disturbing everybody.  The mother hands them paper and pen and sends them on a mission: to write down the names of all the playwrights whose profiles are displayed in medallions on the walls of the Comédie Française building.  They are excited by this new venture and set off immediately, arguing about who is going to write the names down.

A few minutes later, they’re back with a list.  Their mother asks them to read it out.  Jean Racine.  Pierre Corneille.  JBP – Molière.

So what does JBP stand for?

Yes. Jean and what else? 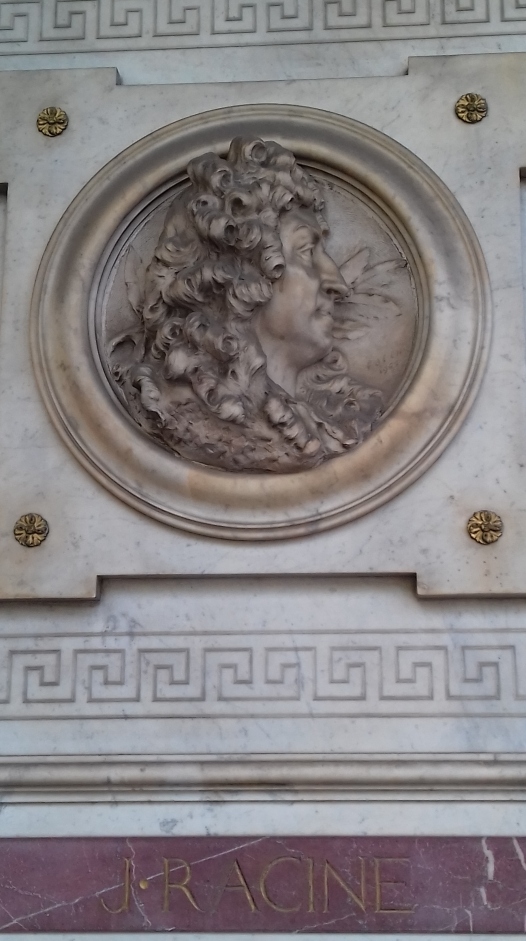 There is not much appetite for running around anymore, and the box office is about to open.  The mother opens the dog-eared book again.