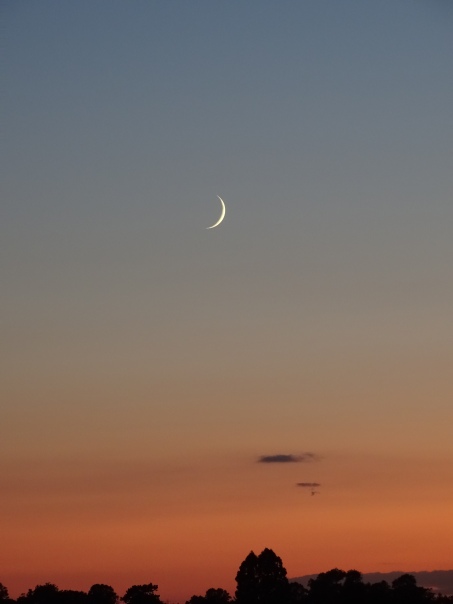 The crescent of a new moon is slowly emerging through the darkening sky.  A pale silver at first, now with a bright, almost golden glow.  A waxing new moon.  A middle-aged lady in the flat down the corridor, when I was growing up in France, taught me how to distinguish the moon quarters.  “Just hold up an imaginary stick against the moon,” she said. “If it forms a P, then it’s premier – first, so a waxing moon.  If it forms a D, then it’s dernier – last, a waning moon.”

My grandmother would have smiled and said, “It’s going to be a sunny month.”  She always checked the new moon and, depending on the inclination of the crescent, would predict the weather, or at least the chances of rain.  The more vertical, the least chance of rain, the more inclined, the more likelihood of a wet four weeks.  If it lay practically flat, with its tips sticking up, then don’t even think of leaving the house without an umbrella.

The funny thing is, her predictions always came true.  In the thirty-five years since I left my family home, it has never occurred to me to check for myself.  I wonder if the English moon follows the same pattern as its French and Italian counterparts.

I have always found the moon inspiring and soothing.  I love the delicate, golden sliver of a curve promising new beginnings, and I love moonbathing in its bright, silver fullness.  I once had a bedroom where once I month I went to sleep with the curtains open and the full moon shining brightly in my face, making me feel safe and deeply at peace.

The moon for me is indisputably female.  I don’t know what Eric Maschwitz was thinking when he wrote the line “Poor puzzled moon, he wore a frown” in A Nightingale Sang in Berkeley Square.  I can’t see any Man in the Moon.  Only a kind, understanding, maternal smile that says Sleep peacefully, I’ll watch over you. 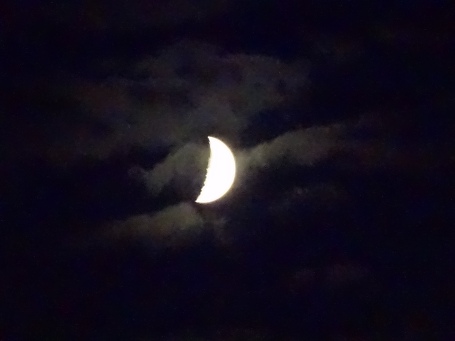 At school, during maths classes, I would sometimes write sonnets or free verse in honour of the moon.  I spent summer nights in Rome lying on a sun lounger, staring up at the moon.  If I’d had to choose between the sun and the moon, I would have sworn allegiance to the moon without the slightest hesitation.

When I was much younger and brazen, I would sometimes tell people who insisted on my defining my accent that I originally came from the moon.  Didn’t they know there was life there that couldn’t be detected by machines? Of course there was.  Everybody lived in houses made of crystal, with roses and honeysuckle climbing up the walls, and musicians playing the lute to lull you to sleep every night.

In recent years, I have steadily been moving towards the sun camp.  Hardly surprising after over thirty years in a country where the sun, far from being a rude imposition, is rather an overly tactful visitor constantly anxious about outstaying its welcome.  Now, I rush out to catch ever sunbeam I can.

And yet the moon is splendid tonight.  So slender, so straight.  I remember my grandmother’s words.  I must pay attention to the weather this month.