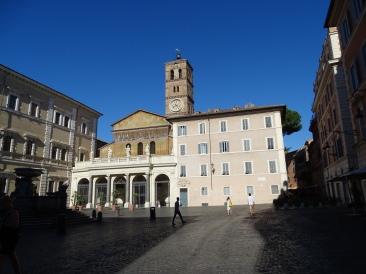 Yesterday morning, when I opened the windows my skin suddenly felt taut.  It was like a slap. There was a a chill in the wind.  The sky was a pale, drab grey.  My heart sank.  It’s only the middle of August.  Oh, no, not autumn already.  Not yet.

Growing up in Rome, I hated August.  The month of the deep sleep.  Everything ground to a halt.  All my school friends away.  Although the city centre was, as ever, overrun with tourists taking pictures of anything they couldn’t buy, residential areas would turn into ghost towns, with every Roman who could escaping to the beach or the mountains.  Many shops were closed for a couple of weeks, you would wait even longer than usual for a bus, no theatre, no opera, no concerts.  Hardly any cars.  You could practically walk in the middle of the road.  And, of course, the stifling heat.  My family couldn’t afford holidays away, so even though I hated school, I would look forward to September injecting some life into the late summer stupor.

When I moved to London, I found it exhilarating to live in a place that functioned all year round, where you could go to the theatre or a concert even in August.  All right, there were two weeks (now three) of general lethargy and inefficiency excused by Christmas, but I no longer dreaded the approach of late summer. 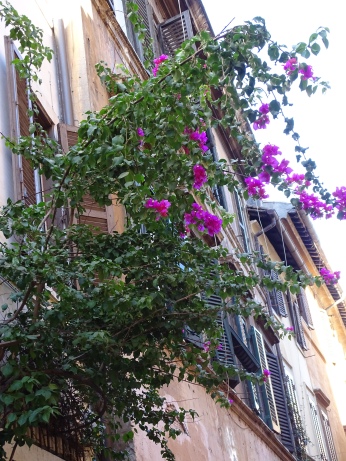 off is a major event) and have spent the last thirty-five years living on an island where the climate has severe commitment issues, I increasingly miss that month when an entire country slows down.  I now see August in Italy as the equivalent of the Wu Chi stand in QiGong.  The time of nothingness that creates.  A time of rest to take stock, to gather your energies, a time of merging with the allness before becoming yourself again.

I find that I miss the month of Ferragosto.  The feast of the Assumption of the Blessed Virgin Mary on 15th August is not marked in England.  In Italy, in France, in Greece and other parts of Catholic and Orthodox Europe, it is a bank holiday.  But like so many Christian holy days, the Church superimposed the Day of the Assumption over a pagan celebration, in this case the ancient Roman festival Feriae Augusti. 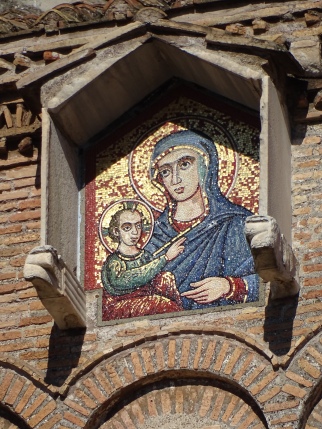 After thirty-five years of Protestant work ethic, it’s not the heat and the boredom of Ferragosto that come to mind.  It’s the peace and quiet, it’s having breakfast on the balcony and playing music from the flat loud enough to hear it outside without worrying about disturbing the neighbours because the entire building is empty for at least a week.  I miss a chorus of cicadas singing you to sleep in the torrid hours of the afternoon.  Lying on a sun lounger late after midnight, looking at the night sky, counting shooting stars, until you feel as though you are falling into the sky.

As a write this, the rain is pitter-pattering on the window panes, the cornflowers on our balcony swaying in a half-hearted wind, and the sky is a dreary grey, I recall another Ferragosto tradition in Rome – the post 15th-August thunderstorm.  I remember it as happening practically every year, right at the end of the holiday.  One of those Roman thunderstorms, with thunderclaps like loud firecrackers, rain pelting down so hard you couldn’t hear the radio or TV, rivers rushing down the streets.  The kind of rain – once the thunder and lightning have ceased – you want to stand under after two months of stifling heat, feel it soak through your clothes, hammer on your scalp, drum on your face.  Then, half an hour or so later, it all stops, the sun dispels the clouds and its rays make the wet streets glow, and a rainbow draws an arc across the now bright blue sky.  But everything feels just a little cooler.  Cool enough to mark the end of a chapter.  You know the worst of the heat is now over for this year.  You know that in the next couple of days, the shops will start reopening and your neighbours returning.  And you feel refreshed, rested, ready for the new chapter.

This entry was posted in Uncategorized. Bookmark the permalink.