I’d grieved over the meaninglessness of my first cat, Pyewacket, going missing and now felt I was ready for a new feline room mate.  Kittens in London are like gold dust, since most people have their cats neutered and spayed, but I was determined to get a kitten, this time. Pyewacket, an attractive brown and white tabby with green eyes, had been rescued from the RSPCA as a grown-up cat, and her early life had been so scarred by unknown traumas that it had taken six months before she would allow me to stroke her, and although every bit of effort I made in our relationship was definitely worth it, this time, I wanted a yet unconditioned animal I could accustom to having its claws trimmed, going out into the street with me (since I didn’t have access to a garden), and living with some of my lifestyle quirks without too much of a battle of wills.

One Easter Saturday, I took several means of public transport from Fulham to a pet shop in Hackney, where there were two kittens on sale in the window.  The first was a postcard-pretty male, ginger and white, plump, with big blue eyes.  I picked him up but he pushed against my hands, clearly not finding me very simpatica.  There was a small heap of spiky grey-black fur curled up next to him, fast asleep, the heap rising and falling with every breath, totally impervious to the world around it.  I picked it up and the furry heap unfurled into something with a big head, small body, short but undulating tail, sparse fur clumped in poo, and a pair of saucer-size, sleepy, grey-blue-green eyes.  It curled its tail around my hand and began to vibrate in something resembling a purr. When  I handed her to the shop owner, the eyes grew even wider and a little bald mouth began to open and close, making no sound but clearly miming “Miaow!”, digging its tiny claws into the woman’s hand, trying to free itself, its body language suggesting it wanted to come back to me.

So I guess it would be accurate to say that it was Genie who picked me, rather than the other way around.  On the way back home, I stopped to buy a bottle of Johnson’s Baby Shampoo.  There was no way I was going to cuddle all that caked poo.  We had our first disagreement over a sink filled with lukewarm water and baby shampoo, into which I simply immersed Genie, and proceeded to rub with my fingers, while holding her to prevent her from exiting the sink.  More miming of “Miaow!” without any sound being emitted.  Then I wrapped her into a towel, and dried her.  No sooner had I finished than she bolted out of my hands, across the room and scrambled up the curtains.  She remained up there, upside down, surveying the large window and the room, before coming back down, leaping onto my futon, taking a spot in the very centre of it, taking several minutes grooming, then falling fast asleep for over an hour.

We had our second strong disagreement that first night together – about the sleeping arrangements.  Genie had decided that she would sleep under the duvet, i.e. inside the bed, with me, while I was quite adamant that her place would be at my feet, on top of the duvet.  The tug of war went on until the early hours of the morning.  She crawled into the bed, I picked her up with one hand and put her down over the duvet.  She crawled back in, and I took her back out.  When I finally fell asleep, I woke up because something was tugging at the strap of my nightgown.  Genie was finding it highly entertaining to bite at my strap, pull it away from my shoulder, then let it go so it would spring back against my skin.  Over, and over again.  I grabbed her and put her down at my feet.  I fell asleep again.  Something was tickling my back.  I was lying on my side and Genie was fast asleep, curled up against the space between my shoulder blades.  As she breathed in and out, her sparse fur tickled my skin.

The pet shop owners had told me Genie was eight weeks, but when I took her to her first visit to her vet, a few days later, he said she was barely more than six, which accounted for her lack of voice, her tiny size, and the sparse fur.  He thought she was a Siamese or Burmese mix.  He threw a crunchy on the couch.  She pursued it, grabbed it with her teeth but it was too hard for her.  She insisted, turning her head to one side, then the other, until she finally crunched it, chewed it, and swallowed it triumphantly.  The vet smiled.  “Most other kittens that age would have given up because it’s too tough.  Strong personality.”  Then he smirked at me.  “I foresee a tempestuous friendship.”

For the following six months, I went to teach every morning with dark rings under my eyes, yawning and confused by yet another sleepless night, kept awake by Genie’s nocturnal games.  My colleagues teased me and suggested that perhaps I should have a baby instead.

Then, there was the challenge of training her to use the hooded litter tray.  She would spend ages playing with the litter, pawing it out onto the carpet, then, tired from all the exertion, she would sit on the edge, her bottom on the outside, and pee onto the carpet.  I was going demented, seeing the stains multiply no matter how much Dettol I used, picturing what my landlord would charge me for the damage.  It was a friend more au fait  with the family traditions of cats who came to my rescue.  “After the kittens have eaten, the mother cats lick their bottoms to stimulate the toilet reflex.”  So I folded up a square of kitchen paper, wet it with warm water, and did what mummy cats otherwise do with their tongues.  Hey, presto! Genie didn’t need to be told twice and, from that moment on, used the litter tray as her loo.

As time went on, Genie turned into a sleek, glossy black number with a white smudge on her breastbone and a perfect white triangle on her lower tummy.  Her eyes turned into a bright amber, and she began forming a loud, protracted, modulated “Miiiaaaaaaooowww!!!!” like that of a Siamese cat.  She also began to chatter to me, responding to everything I said, sometimes even starting a conversation of her own accord.  When I came home from work, she would run up my leg, to my chest, her paws around my neck and her face buried into the back of my neckline.  I would walk around with her in my arms like this for a good few minutes, while putting the kettle on and starting on dinner.  At night, she slept next to me, on top of the duvet, or sometimes at my feet.  To this day, years after she passed away, whenever I turn in bed, I automatically wake myself up, worried I might roll over her.

At the weekend, we would go and have coffee at our local Café Tinto, on the Fulham Palace Road, with Genie in a white sports bag over my shoulder.  We would seat on the bench, I’d read The Guardian while she tore up the sports pages next to me.  The Colombian owner would offer her a saucer of milk, which she always declined.  She didn’t care for milk, but for yoghurt, thick, Greek yoghurt – full fat, of course, none of that low fat rubbish.

Genie had very definite likes and dislikes as far as humans went.  It was simple.  She either liked someone, or she categorically did not.  And one of the people she did not like, was my mother.  When, for a few years, we had to move in with her, Genie declared psychological warfare on her.  Strange, seeing that my mother is one of those genuine animal lovers to whom every cat and dog in the street flocks.  Whenever she tried to stroke her, Genie would hiss, growl and eventually strike my mother’s hand, though always with her claws sheathed.  She would also engage in provocation games where she would sit on the floor before my mother, still as a statue, staring at her, unblinking.  After a while, my mother would grow nervous.  “Why is that cat staring at me?” at which point Genie would open her mouth wide in a loud, protracted, wailing “Miiiiaaaaawwwwwww!!!!!!!” My mother would leap up from her chair.  “Oh, sweetheart, would you like some food? Oh, darling, how about some yoghurt?”  She’d rush to the fridge, pull out the carton and dollop a spoonful into the cat dish.  But the cat was nowhere to be seen until another wail was heard from the room next door, where she sat looking up at the balcony door.  My mother would hasten to open it.  “Oh, pussy-cat, you want to go out on the balcony!” But Genie would turn around and slink away, out of the room, leaving my poor mother standing there, with the door open.  “Your cat is screwed up,” she’d say.  No, not screwed up.  Manipulative.

There is so much more I could write about Genie, but how can you express in words – so limited and limiting at times – the respect, admiration, love and perfect understanding you can be so lucky, so blessed to have with an animal?

How can you describe the oneness you feel with him or her when staring into his or her eyes, and your absolute certainty that this animal knows things about Life that your brain, however developed, is just too rudimentary to perceive?

How can you explain the powerful impression you have that this animal sees parts of your soul that your fellow-humans aren’t even aware of?

How do you convey the anger, the rage, the sense of injustice, and the wish to inflict emotional suffering on an emergency vet who gives this animal the wrong injection? The heartbreak you wish this vet to experience because, at that moment, when you could howl and slam your own head against the wall, you think it’s the only way she will realize just what she has done to you? Do people ever understand other people’s pain unless they feel it themselves?

Genie understood more than either that vet or I.  It was the first and last time she ever hissed at a vet, when the needle went into her flesh.  The injection that was supposed to keep her alive. 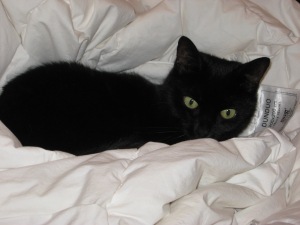