We had some snow, a couple of weeks ago.  Soft, white powder sifted out of a dark grey sky all day, without stopping.  Eventually, the dusting on the ground and roofs thickened to a cloak, and muffled the city sounds.  I love snow.  The crunching under my boots, the sensation of cleanliness, the crisp air.  I start listening to Grieg’s Peer Gynt, Tchaikovsky’s Pathétique and other “snow soundtracks.”  I wear a thick pair of Irish wool socks inside my only footwear that is really snow proof – a pair of black Wellington boots.  No – not the trendy ones, that bear a label with another word for “pursuer” right below the knee, and that all the London bright young things are now wearing at the first few drops of rain.   These ones, I bought from a Cambridge camping/army shop, and cut down to calf-length with a pair of kitchen scissors, in preparation for a winter trip to Wisconsin, about twelve years ago.  Wisconsin, in a place where the snow was high and the squirrels gargantuan, where I caused much vocal excitement among the neighbourhood dogs for being the only pedestrian, and where I could not find anywhere to serve me dinner after 7 p.m.  In a place where the landlady of the guest house could not fathom why I considered sweetened pancakes and maple syrup a little sickening (I finally asked her for scrambled egg on toast and she put sugar on the toast!) 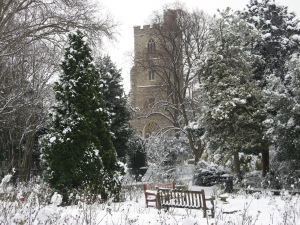 Back to the snow.  I find snow magical and there are few places in the world where snow possesses special, mind-altering powers, as it does in England.  For, indeed, here, it has the power to produce amnesia.  In England, it now snows most winters and yet, every year, the nation reacts as though it has never seen it before.  A few flakes suffice to trigger overwhelming incompetence and disorganisation in the land.  In London, except for the Centre and privileged areas like Chelsea, Kensington and Holland Park, the authorities mysteriously never seem to have enough grit to scatter on the streets.  Where I live, for instance, snow is 5% joy, snowmen and walks in the park (the first day) and 95% contending with icy pavements, trying not to slip and break a limb (the following week).

If you are lucky enough to live in area where grit is abundant, you see the rather 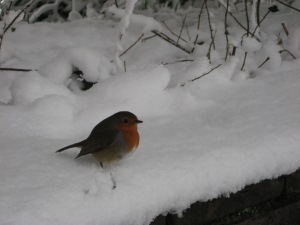 unaesthetical transformation of fluffy white into brown slush.  When I was in New York, I noticed people spraying something on the snow which made it manageable for pedestrians whilst keeping it white.  Here, we lack the Manhattan sense of style.  In the spirit of no-nonsense practicality, we use unattractive brown grit.

When I lived in Rome, where snow falls ogni morte de papa (literally, “about as often as a pope dies”), when the white stuff did fall from the skies, I saw anti-slip chains on the tyres of many cars.  I have never seen them here.  Here, snow sends public transport into a panic.  Buses are delayed or cancelled and even the Tube can be affected.  I am still trying to figure out how snow can stop underground trains from running… 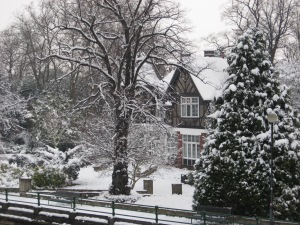 It is Candlemas.  The snow has disappeared.  Vanished, as though it never happened.

By Shrove Tuesday, our memories will have been wiped cleaned.

Then, next January, when it snows again – snow? What’s snow? How do we cope with it? Oh, dear!

19 Responses to Britain Sees Snow for the First Time – Again