A ten year-old Italian boy called Federico went to the Tate Modern with his mother.  When he saw Damian Hirst’s formaldehyde-pickled cows, he said, “That’s cruel.  Why didn’t they allow this calf to grow up and have calves of its own?”

I was told about this occurrence over dinner, that evening, by some amused adults.  I leaned across the table and said to the boy, “I totally agree with you.”

Federico’s eyes sparkled with intelligent fun.  I winked back.  He had helped me unleash thoughts about Modern Art, I had harboured for some time.

Words often used to describe Modern Art.  Words of violence.  Words we also often use when we find ourselves before a thing in a museum, which baffles us but which we think we should understand.  We do not want to appear stupid, by not understanding.  We think that this thing must be rich in meaning or symbolism, surely, or it would not be displayed in a reputable gallery or museum.  Critics would not call it a “milestone” or a “seminal work”, would they? Critics are free-thinkers, right?

“That’s cruel.  Why didn’t they allow this calf to grow up and have calves of its own?”

That is the voice of the free-thinker.  The voice of unadulterated innocence, which speaks straight from the heart.  It does not care if someone thinks it is stupid.  It is true to itself.  It is that same voice which rose from the crowd, in Hans Christian Andersen’s story, and cried, “But, Mummy, the Emperor is naked!”

Shortly after the wonderful, intelligent Nora Ephron passed away, I read this quotation of hers: “I am continually fascinated at the difficulty intelligent people have in distinguishing what is controversial from what is merely offensive.”

Just because something breaks the rules of convention does not, per se, mean it is good, or Art.  One must first assess whether that convention is good or bad, before deciding if breaking it is an act of courage or the spitefulness of an egotistic brat.

Being original is not automatically good.  You cannot try to be original.  Originality is like style – you’ve either got it in you, or you haven’t.  Trying to be original can only result in tack.

I think many contemporary artists seek – above all else – to break the mould, to defy rules for the sake of defying them, and to brand the world’s stage with the mark of their ego – as opposed to creating a work of art that will please.  Pleasing is now considered weak, unadventurous, dull.  Pleasure has become coupled with guilt.  It does not occur to them that it takes skill to please.  Today’s motto is subvert, shock, make people feel uncomfortable (again, discomfort is not always a path to learning; it can also be an instinctive rebellion against something that is actually wrong for us).

My question is, what gives an artist the right to be so aggressive? What degree of arrogance allows an artist to think he or she has the keys to the Truth? In my book, a true artist loves the art more than him or herself.  He/she is the servant of Art – not its manipulator.

Let us take London’s newest building, the Shard (the very word makes me wince).  As its name suggests, the building looks like a sharp fragment of broken glass stabbing into the soft blue sky.  This is not the inspirational spire of the Chrysler Building, streamlined and refined.  It is a weapon in a pub fight.  What kind of society admires a shape that evokes violent cutting, breaking, bleeding, pain?

Until the 20th Century, Art was designed to caress the senses, glorify Nature and the human body.  Art enhanced the pleasure of life.  Art exalted Beauty.  John Keats wrote

“‘Beauty is truth, truth beauty,’ – that is all
Ye know on earth, and all ye need to know.”

You only need to observe the colours and forms of Nature, to realise that this is, indeed, true.  Purposefully creating ugliness is an egotistic perversion, since nothing in the natural world is ugly.  Ugliness teaches only ugliness.  It is unnatural, in the strongest sense of the word.  It goes against the perfection of this beautiful World.

Of course, we cannot all like the same things.  I may gush in front of Verrocchio’s Tobias and the Angel at the National Gallery, while you may rejoice at the sight of Rosina Wachtmeister’s cats.  However, let us not shy away from being discriminating.  There is art; there is what – with the correct marketing spin – becomes a money-making venture aimed at the same people who marvelled at the Emperor’s invisible thread cloak; and there is also what Kenneth Branagh’s character in the film Peter’s Friends calls “Shit with a capital SH”.

In this era where reclaiming personal power is so frequently advocated, let us claim back our right to be pleased, to be caressed, to be spoilt with Beauty.  Let us demand to be wrapped in it, to swim in it, to drink it to our hearts’ content.  Let us gratefully rediscover Pleasure. 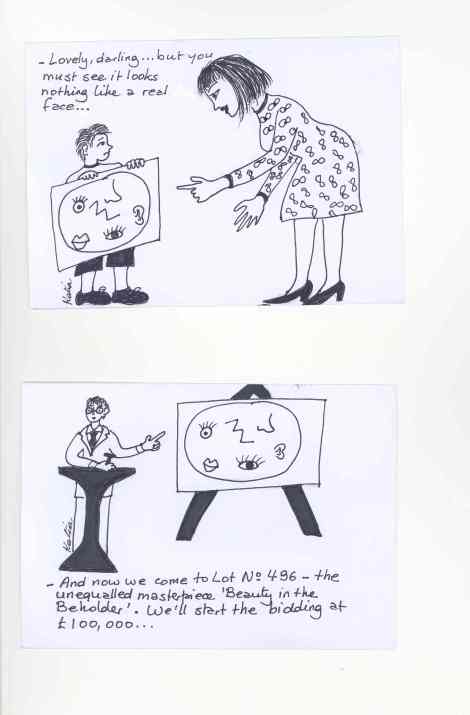 20 Responses to Odds & Ends: Art or a Naked Emperor?