Words and Civilisation: English – the Fast Food Burger of the Language World 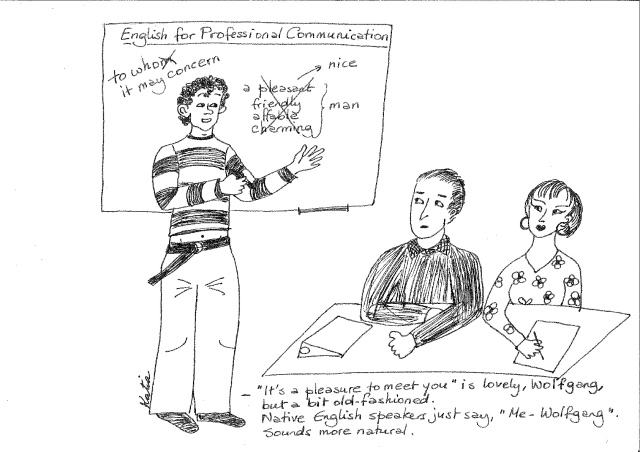 English is a democratic language.  Vox populi, vox linguae.  As soon as 51% of people say something in a particular way, then it becomes correct.

Incorrect English usage.  Now there is a minefield.  Do not even venture there.  “Incorrect” implies that there is such a thing as “correct”, and what is “correct”? Who are you to decide what is and is not correct? On whose authority? And here you find yourself in the firing line.

French has the famous Académie Française.  Italy, the renowned Accademia della Crusca.  Other languages, including Spanish, Portuguese, Japanese, Hungarian, Polish, German, Arabic, Greek, Russian, Korean and Turkish, have equivalent academic bodies who act as custodians of language as a regulated, monitored and supervised form of expression.  They have someone who takes on the responsibility of separating the right from the wrong in grammar, spelling and usage.  It is even a position that invites respect.

In England, imposing rules on the language would be instantly considered as undemocratic and an attempt to restrict personal freedom and human rights.  You may have been taught that the singular possessive form takes apostrophe, s (as in Tom’s car) but it would be dictatorial and intolerant of you to impose that view on others, who may choose to use apostrophe, s, to illustrate the plural of a noun (as in fish and chip’s, frequently seen listed on the menu blackboards of our beloved pubs).

English is a living, ever-evolving language, and the general belief is, that constricting it within rules would stifle its progress.  English is not a carefully pruned rose; it is the free and unruly, miscellaneous plant that takes over the garden.

English is currently the most useful and the most functional language in the world.  It is readily available and easy to grab – like a fast food burger.  You can have it with any combination of prepositions.  So what, if you get them mixed up? Nobody will look down on you, or even correct you – that would go against your human rights, apparently.  English is freedom.

English is communication.  Why strain your brain learning half a dozen synonyms, when a single word does the trick? The adjective ‘nice’ is a wondrous, multi-purpose, one-size-fits-all, adjective.  Nice person, nice food, nice weather, nice house, nice music, nice clothes.  Thanks to the supersonic evolution of English, ‘nice’ has outgrown its original 14th Century meaning – stupid.  Why burden yourself with vermillion, crimson, scarlet, burgundy and terracotta, when plain old red will do.  Why bother with an elaborate dish  when you can just fill the hole in your tummy with a cheeseburger? You do not need to spin words like a filigree pattern of silver to get your message across.  Let us go back to basics, and adopt a grass roots approach to communication.  The Ape-Man coined it perfectly.  “Me – Tarzan.  You – Jane.”  And communication was established.

I would add, that our language tells the world who we are.  So let’s show them.

10 Responses to Words and Civilisation: English – the Fast Food Burger of the Language World