An Apology for the Grey Squirrel

First of all, what is wrong with rats? I can feel my question sending ripples of disgust among you.  “Eek!”, “Yuck!” Your lips are twisted in revulsion.  Rats are dirty – you say – the live in sewers and run along polluted river banks, and spread disease.  I reply – rats could not thrive without human dirt and disease.  And who is responsible for those? Humans, who generate more detritus than any other creature on the planet.  As for being “pests”, I have come across several many humans whom I could accurately describe as such, but no animals.

In England, the grey squirrel is viewed as Public Enemy No. 1.  Express affection for grey squirrels, and you are answered with a contemptuous narrowing of the eyes and rebuked for loving the criminals responsible for the demise of the native red squirrels.  One vital fact is omitted.  North American squirrels did not fly nor swim en masse across the Atlantic.  They were purposefully introduced here in the 19th Century… By humans (and once again, the tune from Dukas’s Sorcerer’s Apprentice rings in my ears).

I love grey squirrels.  Moreover, I admire them.  Granted – they can be spiteful but carry out their revenge on you with a great deal of charm.  They knock down your bird feeder or pee on your windowsill (generally as a reprisal for your failing in your duty to provide food), and always linger to watch your reaction with an invariable expression of irresistible cuteness.  The grey squirrel does not take no for an answer.  Once it is fiercely determined to appropriate your box of corn flakes, then you might as well stand aside and watch the creature drag the cardboard box along the kitchen table, and heave it onto the windowsill (I speak from personal experience).  Now that‘s focus.

I first became acquainted with squirrels when I lived in Cambridge, about twenty years ago.  They were regular visitors at our sloped-ceilinged attic flat in Cranmer Road, which they reached by climbing up the drain pipe before running up onto the roof.  If the windows were locked, they tapped on the glass pane to request admittance, and waited with intermittent – somewhat impatient – flicks of the tail.  After a few weeks, I learnt to tell them apart by their markings, size and battle scars, and gave them names.  Ariel, Lysander, Desdemona (she had weepy eyes), Tybalt (he always got into scrapes), and Ginger (a pale carrot albino).  Occasionally, they would chase each-other up and down the living room curtains, at which point I would chase them out.

How can you fail to have affection and admiration for a creature so agile, so manipulative (that takes intelligence), so wilful, so tenacious, and so resourceful?  The grey squirrel is the Scapin, the Figaro, the Truffaldino and the Gianni Schicchi of the animal world – and we are conquered by the latter ones’ charm and audacity.

At the end of Puccini’s only comic opera, Gianni Schicchi addresses the audience.  He tells us that his cheating made Dante consign him to Hell.  If, however, we have enjoyed the performance, he asks us to provide him with mitigating circumstances… By giving him a round of applause.

And so the grey squirrel stands up on its hind legs and lifts a paw to its chest.  Me – a criminal? It seems to say, and stares at us with black, liquid eyes that glisten with innocent intensity.  Let us find mitigating circumstances for its cheekiness, and reward it with a nut or two. 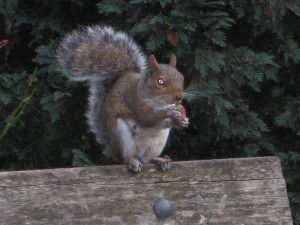 Actually, who wants nuts when you can have Swiss chocolate!

4 Responses to An Apology for the Grey Squirrel